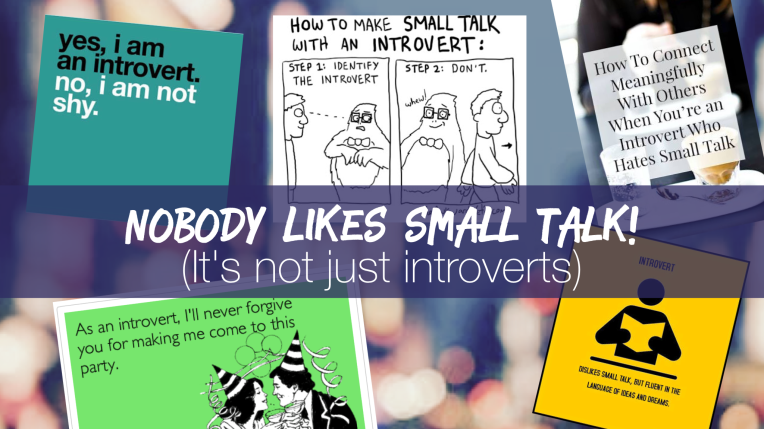 Introverts (those who gain or recharge energy by being alone – as opposed to extroverts who draw energy from others) are often assumed to be shy, socially awkward or even rude because of the way they engage or don’t in social environments. However, those attributes are more to do with personality or emotional intelligence than the number one marker of introverts – they find people-heavy environments physically and emotionally exhausting.

Introverts often express a deep dissatisfaction and even frustration with “small talk”. But I have an increasingly strong belief that NO ONE likes small talk. Not even extroverts.

Extrovert readers, please feel free to correct me if you disagree, but no one likes small talk. It’s repetitive, it’s shallow and it’s only really a means to the end – a more rich and stimulating conversation or connection.

The difference is that extroverts have the social stamina to endure more of it. Because they gain energy from being with people, they are not as drained by the small talk and don’t fear an exhaustion of their social energy before getting to a deeper conversation. They are also happy just to be talking – to people! – and so will more readily settle for surface level chit chat.

For introverts, there is a very real chance that all of their social energy will be spent before they get to a point in conversations where they find meaningful connection or intellectual enrichment.

Nobody likes small talk. Some are better at it. Some can participate in more of it before fatiguing their social energy. But no one actually likes it. No one comes away from a party and says “that was so good I spoke to a whole lot of people about absolutely nothing”. People of all temperaments are stimulated and satisfied by intellectually or emotionally meaningful connections with others.  People want to laugh heartily, be challenged mentally or connect personally – regardless of temperament.

My hot tip for an introvert to thrive in social gatherings is this – find yourself an extrovert! Stand near them and ride the wave of their small talk into an actual conversation. Save your energy for the good stuff!