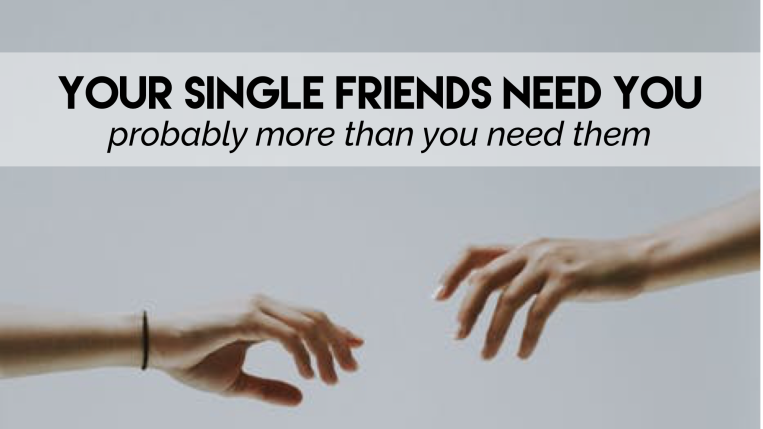 A few years ago I was sitting with my housemate and we both got a text message from a married friend. She was letting us know that she’d had some medical issues arise. There’d been some preliminary testing that was either worrisome or inconclusive enough to warrant further investigations. So she was going to have more tests done and was asking for us to be prayerful.

My friend and I both thought to respond in the same way and I sent a message back including “I hope you have some friends journeying this with you”. We later discovered that this was considered to be a strange kind of response. There she was informing us as her friends and inviting us to be part of the process – why were we questioning whether she was including her friends? Ultimately as a married person the need to contact friends was triggered far later in the process than it might have been for a Single person. A Single person who is experiencing negative health symptoms would probably contact a friend straight away. A Single person would seek the opinion of a friend or family member to know if they should go and get that checked out. A Single person might let a friend know that they’re going to a doctors appointment and perhaps even invite them to come along. So by the time further testing was required a Single person may have included their friend/s a lot more in the process. The reality is that for the married friend she had been processing all that with her husband up until that point.

Single people can have different expectations and requirements of friendship.

For a Single person, their friends are the entirety of their network of advice giving, problem-solving and listening. For those who are married and in a family environment a friend serves a different purpose. If circles of trust were to be drawn a spouse might find themselves at the very core and then friends at varying stages of distance in the widening concentric circles. For a Single person without a spouse at that core, often friends are drawn into a place of higher trust, of higher reliance; of higher connectedness.

What this creates is a potential power and need imbalance in friendships. Where the Single person requires more of you than you require of them. Where your name would be listed closer to their inner circle than their name would to yours. A friend of mine recently recounted a revelation she’d had of this when her Single friend asked her to come around to look at her new flooring. She thought it was an odd request until she connected with the fact that she would have had numerous interactions with her husband over new flooring and not felt the need to tell others – whereas her Single friend might not have had any engagement about her floors with anyone else. Perhaps a trivial example, but a helpful illustration of the different experiences.

This plays itself out in many ways, including socially. Where a planned social gathering might be additional to your weekly social calendars and fuller household, it can be the entirety of a Single person’s social connectedness. Where a cancelled dinner or a lack of invitation might result in you having a more quiet night at home, for a Single that could equate to being completely alone.

My friend Nancy and I talked about this recently as we sat across from one another at dinner. I made the observation that I needed that interaction more than she did. She’s married and is also a mum and as we talked some more she reflected, “I don’t think I had ever really considered how much my relational tank is filled incidentally and how that shapes how many friends I need, what I need from them, and the time and space I have to give them .”

What that means is that a Single person needs to maintain a lot of relationships to ensure their input and output are sufficient to experience the human connection we are built for. Even for me, as a highly extroverted and socially and relationally competent person, that can be EXHAUSTING! There’s a lot to balance to ensure that there are enough of those once a week, once every fortnight, monthly catch up types of relationships to spread across the day to day of life in order to keep the relational tank at a healthy level . That need makes us vulnerable. There’s great risk attached to this reality that we probably need you more than you need us. 

Singles, identify and own this reality. You need others. It’s risky. It’s exhausting. It takes intentionality and purpose but you can create the kinds of relationships that will allow you to give and receive the love, belonging, serving, fulfilment, purpose and joy that you need. 

And for you non-Singles, maybe you could do a self-audit like my champion friend Nancy, to recognise the level of relational filling you operate out of before leaving your house or making any extra effort. It might increase your sensitivity to the needs of the Singles in your world and grow your understanding of the neediness they experience and the risk they take to stay relationally engaged .