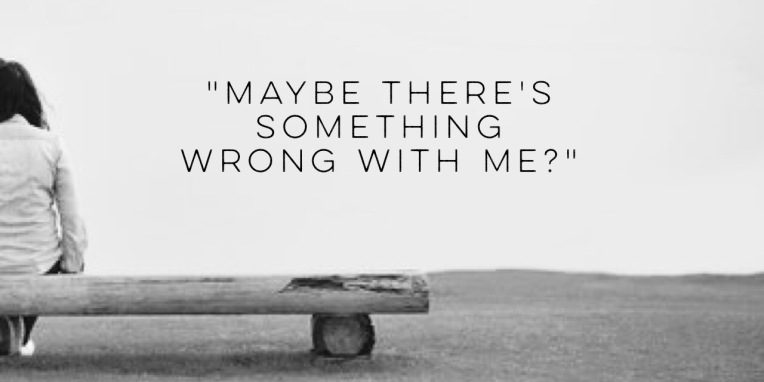 This was the conclusion of a 25 year old (yes, 25 years old!) single contestant/participant on the first episode of the new series of Married at First Sight when reflecting on her life status.

She is 25. She’s single and doesn’t want to be. There must be something wrong with her.

Imagine me sitting opposite her in a coffee shop (because that’s what I’ve been doing) and this is what you’d hear me say.

Then I would let her pay for the coffee.

The more I think about the “maybe there’s something wrong with me” question that has the potential to plague single people of all ages and stages (more so for some than others) – the more I think it’s a question we need to face and not avoid or dismiss. Because the haunting nature of that question has the capacity to powerfully derail an individual in their living of a fruitful and fulfilling life.

So single dude, single lady, IS there something wrong with you? No really, is there? Don’t answer “well there must be because I’m single” – think beyond that. Is there anything wrong with you? While that possibility lies unchallenged in your psyche it will have an unhealthy control over your sense of self and could lead you to finding yourself sitting in a limousine questioning whether or not the decision to marry someone you’ve never met is a good idea. Or making other very bad decisions in life and love. Find out if there’s anything wrong with you and work to fix it. Get that question off the table.

You’re probably not single because there’s something wrong with you. Firstly, some of you haven’t even had the chance for a prospective partner to find out what’s wrong with you. And secondly, look around – have you seen some of the people who ARE married? There are some twisted, broken, weird and altogether unpleasant people who are married! There’s stuff wrong with them and they’re married!

Here’s a word of advice for you without the price of the coffee. Take the question off the table. Move on to more productive spends of your emotional energy.

2 thoughts on ““Maybe there’s something wrong with me?””